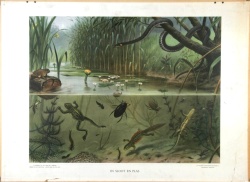 Ask the average Dutchman or woman what colour a frog has and the answer will most likely be “green”. Probably inspired by different sources – depending on the age of the respondent – from Kermit the frog to the old drawing “Ditch and puddle” by the Dutch draftsman and painter Marinus Adrianus Koekkoek. (This drawing, among others by his hand, used to hang in every primary school in the Netherlands till the ‘70s.)

And that’s right, there are green frogs, although the green frog as a single species doesn’t exist as such, not in the Netherlands anyway (the term “green frog” is also used for the North American species Rana clamitans). Generally a distinction is made between the pool frog (Pelophylax lessonae), the marsh frog (Pelophylax ridibundus)and the edible frog (Pelophylax klepton esculentus). All three are green and members of the family of true frogs (Ranidae), but all three are slightly different. (In the United Kingdom the pool frog is the only native one of these three species but it has a very limited distribution. The other two species, marsh and edible frog, are also present in the UK, but are non-native species, introduced in the first half of the 20th century).

The pool frog is the smallest of the three and mainly occurs in the east and south of the Netherlands. The marsh frog is the largest and you can especially see them in the north and west of the country. The edible frog is a hybrid of these two species and is fairly common throughout the Netherlands. So there is a good chance that you will see the latter species if you are talking about a green frog.

By the way, there is yet another green frog that is found in a few places in our country, namely the European tree frog (Hyla arborea). A specific small grass-green frog with suction cups on its fingers and toes, so that it can climb very well. This species is unfortunately highly endangered and is on the Red List. I have never seen this cute little frog, but I must admit that I have not specifically travelled to look for it. But who knows, one day… You can find this little frog in large parts of the European mainland, but not in the UK.

A short period of blue per year

What many people may not know is that there are also blue frogs in the Netherlands, albeit only for a short period in spring. I am talking about the moor frog (Rana arvalis). During the mating season, which runs from the end of February to the end of May, males develop a bright-blue colouration. They only have this colour for a few days and at that moment they are completely ready to mate. The peak is in early April, so now it’s the time to see these blue guys at work. The rest of the year the males and females are brown, so a mistake with the common frog is to be expected. In terms of size, the two species also do not differ much from each other and they inhabit similar. There are some characteristic differences, such as the shape of the snout. The moor frog’s snout is a bit sharper than that of the common frog. More differences between the common and moor frog can be found on this card from RAVON, the Dutch conservation organization for fishes, amphibians and reptiles). You can find moor frogs in the northern part of Europe. But for instance not in France or farther south and also not in the United Kingdom or Ireland.

It takes some searching …

To see moor frogs you will have to search. The species is no longer as common as it used to be and was therefore listed as vulnerable on the Dutch Red List for some time. At the moment, the species has the status of “not currently threatened”. The species has a preference for small ponds and pools in the forest and on moors. Their preference is for areas with a high groundwater level, for example boggy areas and alder groves. The species is found in all provinces with the exception of Flevoland. (Flevoland is literally the youngest province of the Netherlands. It is located in the centre of the country, where the former Zuiderzee was located. Almost all of the land belonging to Flevoland was reclaimed in the 1950s and 1960s.

The largest populations of moor frogs are mainly found in the east and south of the Netherlands. In the north of the country, where I live, moor frogs can be found in some nature reserves too, for example the Harksteder Broeklanden in the shadow of the city of Groningen and in ‘t Roegwold, a large nature reserve. But also on the Ballooërveld in Drenthe. There for the first time of my life I saw moor frogs. Not just a few, but dozens of indiviuals between large clogs of frogspawn in a small pond in the middle of the heath. And I heard them too. The males produce a  typical sound. They don’t croak, but make a sort of bubbling or popping sound, like air escaping from a submerged empty bottle. It sounds very strange when you hear that for the first time, but you will never forget that sound again. By the way, the males only make that sound during the mating period.

So be quick, their blue period is almost finished and then you have to wait till next year. Good luck with your search for these blue boys.

This post was originally published in Dutch on April 7th 2017