Sometimes, mainly in January, media report on large quantities of long-eared owls (Asio otus) in trees. They may report about groups of five to nine owls in one tree.The authors of the articles pretend as if this number of owls in one tree is a very exceptional situation. Apparently the authors haven’t done their homework properly, because this is very normal behavior for this species. And five to nine in one tree is of course a very beautiful sight, but not an exception to the rule.

If you can discover them in trees because the birds know how to hide very well. Because of the bark-like colouring of their plumage they hardly stand out between the branches, especially when they are sitting in a branch collar against the trunk.When they feel relaxed they spend their time withdrawn in foliage, with their ear tufts barely erected. When they notice a threat they make themselves look taller and put their “ear tufts” straight up. The long-eared owl is usually a very solitary bird, but in autumn and winter it’s very social. The owls like to sit with a group in a somewhat sheltered place, the so-called roost. These roosting spots can often be found in evergreen trees and thickets, such as firs, yews and conifer hedges, but deciduous trees covered with ivy also act as good roosting trees. At dusk the birds leave their roost to hunt, and is only then that it becomes clear how many owls had congregated in the tree.

On average six to eight birds will hold up in a roosting tree. But there are also considerable outliers. Every year I perform counts at several roosting locations in the province of Groningen and the largest number I counted was 21 birds in a giant cypress. There have been Dutch roosts at which people have counted up to 40 or 100 birds! For the world record of communal roosting hotspots you have to go to the northern Serbian town of Kikinda, close to the border with Romania. At the village square there are a number of trees and one of them houses about 150 long-eared owls every winter. In total, up to 734 individuals have been counted in the trees at this village square!

One of the reasons why birds roost is to protect themselves against enemies. Although the long-eared owl itself is a predator, it’s also sometimes eaten by other birds. One of the causes of the decline in the number of long-eared owls in the Netherlands is the fact that the northern goshawk (Accipiter gentilis) is doing so well. This species has no problem with predating the nest of a long-eared owl. But also the European pine marten (Martes martes)sometimes predates an owl’s nest.

Of all owl species that occur in the Netherlands, the long-eared owl is the most common. There are about 2200 to 3000 breeding pairs (SOVON, 2018) in the Netherlands, half the number of the end of the last century. The species is therefore listed as vulnerable on the Dutch Red List. The diet of the long-eared owl consists for a large part (80%) of voles (common vole (Microtus arvalis), bank vole (Myodes glareolus)) and about 10% of mice (mainly wood mouse (Apodemus sylvaticus)). The rest of the menu is filled with small birds such as sparrows (Passer spec.) and greenfinches (Chloris chloris). The indigestible parts (hairs, bones) of the preys are kneaded into a ball in one of the two stomachs of the bird. This ball, a so-called pellet, will then be vomited out. Those of the long-eared owl are gray in colour, uniformly cylindrical in shape and have length of 46 mm on average (variation 37-65 mm). The thickness is on average 21 mm (variation 16-27 mm). The surface underneath a roosting spot is often covered with these pellets 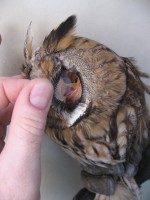 The most characteristic features of the long-eared owl are the so-called ear tufts. The Eurasian eagle-owl (Bubo bubo) has these tufts too, but this bird is a lot bigger than the long-eared owl, about twice as big (35-37 cm versus 60-75 cm). And in addition, the eagle-owl is a rare occurrence in the Netherlands, although there have been several successful broods since 1997.

Ear tufts is a wrong definition, because the ears are not at all where these feathers stick out of the head of the bird. They are more to the eyes behind the so-called mask, the feathers around the eyes. See the photo on the right by Bert Jan Bol on the website of the IVN Owls Working Group Oisterwijk. And these real ears are also not at the same height, but asymmetrical placed. As a result, the long-eared owl is skilled at determining the source of sounds. And that is what it needs to hunt. Owls do not only hunt by sight but also by hearing. Because of their acute sense of hearing they can locate and catch a mouse that crawls under foliage or even under snow. That’s why they have less chance of a successful hunt when it rains. In addition, they can fly almost silently by special velvety feathers on the top of the wings and special little feathers on the front and rear wing edges. These feathers have a ‘sound-proofing’ effect. 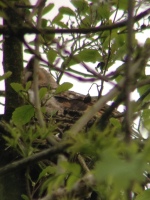 The long-eared owl is already sexually mature by the end of its first year of life. In fall the males try to establish a breeding territory and often inherit old nests of carrion crows (Corvus corone) and magpies (Pica pica). When the male bird has found a good nest, it tries to lure a female with a soft, but still questioning whoe – whoe – whoe. With this call it also defines its territory. About 4-6 eggs are laid in the nest, which is often located at the top of a tree. As written before, this makes it extra vulnerable to attacks by goshawks but also by tawny owls (Strix aluco) for example. In 2014 there was a nest of a long-eared owl in a common ash (Fraxinus excelsior) in the grove behind our house. With every breath of wind the nest swung back and forth and yet the four owlets were able to stay in the nest. In the photo on the right you see a parent owl on the nest and on the left below it some youngsters. All four survived and after a while they fledged. The young birds bumble about from tree to tree and make a complaining screech begging for food. 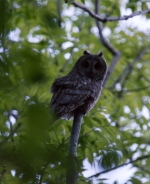 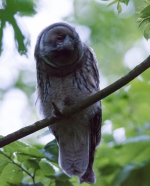 On one night in 2015 we heard a young owl calling. Despite the fact that it was already dusk, I was able to take some pictures of both the parent and the youngster. (For the connoisseurs: photos are made with an ISO6400, f/8.0 and a shutter speed of 1/25 to 1/6!) On the last picture you can see that the head of the owlet is turned almost 90 degrees in the vertical axe. The eyes are almost at a right angle to the body. Owls can’t only turn their heads almost 180 degrees to each side, but they can also tilt their head completely.

They are beautiful, almost mysterious birds. In the last years sadly there was no nest in our neighborhood. But I hope that in the future they will build a nest here once again.

This post was originally published in Dutch on January 28th 2018