One of the bird species that reside in the Netherlands during winter is the great grey shrike (Lanius excubitor). It is not a common winter guest and it has a preference for very specific habitats. You will certainly not find it in the city, it really is a bird of open landscapes such as heathlands. The bird likes to have a high perching spot to oversee its hunting grounds. At the top of a tree or shrub or just on a pole, it keeps an eye on the environment. And then suddenly it flies up. It’s got something in sight. A frog, a beetle or perhaps a small songbird. Because that is all part of its diet. You would almost think that it is a bird of prey and that is not so surprising. The great grey shrike has a hooked beak like those you can see on birds of prey. And that is not the only similarity with some birds of prey: it can hover, just like for instance the kestrel (Falco tinnunculus)  and the rough-legged buzzard (Buteo lagopus). With its head in the wind and hovering wings, its sharp eye focused on a prey on the ground. 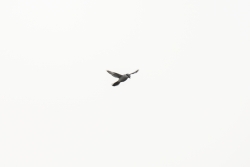 You would almost think that it is a bird of prey and that is not so surprising. The great grey shrike has a hooked beak like those you can see on birds of prey. And that is not the only similarity with some birds of prey: it can hover, just like for instance the kestrel (Falco tinnunculus)  and the rough-legged buzzard (Buteo lagopus). With its head in the wind and hovering wings, its sharp eye focused on a prey on the ground. (Fortunately, I have also been able to take a picture of a hovering shrike, but of a lesser quality, see the picture on the left.) 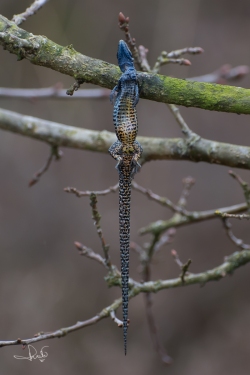 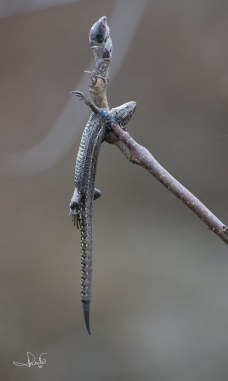 When it has caught its prey, there are two possibilities. Either eating it somewhere quiet or impaling it on a thorn of a bush or, for instance, on a piece of barbed wire. As a food supply for worse times. If you are lucky, you can find such impaled prey in the field. Below are two photos that I made of impaled viviparous lizards (Zootoca vivipara), both prey of a great grey shrike on the Ballooërveld, a nature reserve in the province of Drenthe in the Netherlands.

It is always funny to see what the scientific name means, but also where the native name comes from. In the case of the great grey shrike the scientific name means butcher (lanius)and sentinel of the Latin ‘excubare’ which means, among other things, keeping watch. The butcher will come from its way of impaling its prey. In the United States, birds of the Lanius genus are also called ‘butcherbirds’. Sentinel may indicate its vigilance. Linnaeus probably came up with this name because of its Swedish name ‘warfogel’, nowadays written ‘varfågel’. This literally means a bird who becomes aware of something that, like a sentinel, perceives something. The origin of its English name comes probablyfrom the Middle English ‘shrik’ which means to shriek, based on the sound it makes.

Nowadays you can only encounter the great grey shrike in the Netherlands in the winter. They often return to the same area every year. Mostly birds from Scandinavia, the east of Germany, Poland and beyond. The birds overwinter in the Netherlands as long as temperatures don’t drop too far below zero. If it gets colder, they will move farther southwards. In the past the great grey shrike was a breeding bird in the Netherlands. It bred in the country up until the end of the last century.The last confirmed case of breeding stems from 1999. It is not just the Netherlands where the bird has lost ground. In surrounding countries the numbers of great grey shrikes have also declined rapidly at the end of the last century. The cause can be found, among other things, in the disappearance of uncultivated open areas (of land) such as bogs and heathlands. Many of the remaining habitat fragments are now threatened by acidification and eutrophication.These changes have also caused a decline in the numbers of their prey species. Therefore you can now only find them here during the winter season from about mid October to the end of March. A few hundred birds overwinter in the Netherlands, but their numbers fluctuate strongly from year to year.  On a global scale, the International Union for Conservation of Nature (UICN) gives the species the status of ‘least concern’, but its numbers are decreasing

You may think that you have seen a great grey shrike here during summer, high in a tree somewhere on heathland perhaps. This will almost certainly not be a great grey shrike but a close relative: the red-backed shrike (Lanius collurio). The male of this species also has that typical black mask. Furthermore it also has a hooked beak, albeit less pronounced than that of the great grey shrike. Impaling their prey is a characteristic they share too. It’s all in the family. The red-backed shrike is a breeding bird in the Netherlands, but unfortunately, it is undergoing the same fate as the great grey shrike and is also threatened with extinction. By planting hedges and trees in suitable open habitat (landscape elements that were once much more common) attempts are being made to make areas attractive to these species again. Although these projects are mainly aimed at red-backed shrike, the great grey shrike may also reap the benefits from them. And who knows, maybe this shy masked bird will once again return as a breeding bird in our country.

This post was originally published in Dutch on January 3rd 2017.