I hope my previous blog brought you a clear picture (how appropriate :-)) about how one bird can estimate distances very well while other birds hardly can. But there is much more to write about it. So here it is, part 2 about bird eyes.

As you may still remember from your biology lessons, the retina of the eye consists of photoreceptor cells, among other things. These cells can be divided into rod-shaped and conical cells. Rods are extremely sensitive and can make a good distinction between light and dark. This cells can’t distinguish colours, that’s what the cones are for. Humans can see a wide colour palette, the so-called spectrum, with all the colours of the rainbow. There are also “colours” that humans can’t see, our eyes are not sensitive enough for that. But many animals can see these “colours”. Compare it with sound. Dogs can hear – high – tones that people can’t perceive. This is also the case with so-called ultraviolet (UV) light. Humans can’t see it, but birds can, among other animals. And birds do that with ease. 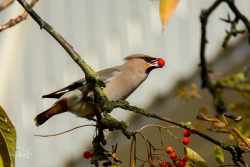 One of the birds that benefits the seeing of UV light is the kestrel (Falco tinnunculus). This bird of prey searches for traces of mouse urine on the ground while hovering. A mouse leaves drops of urine behind and this reflects the UV light. The kestrel can see where the mouse has walked and can follow it nicely. But there are more birds that make good use of the UV light. For example, starlings (Sturnus vulgaris), blackbirds (Turdus merula) and Bohemian waxwings (Bombycilla garrulus) flawlessly pick the ripe berries from a bush, they leave the unripe ones for a while. That too is due to the UV light. Ripe berries have a wax layer that reflects the UV light. A third example is how birds look at each other. With many bird species, such as the blue tit (Cyanistes caeruleus), for us humans there seems to be no difference between males and females. But appearances can be deceiving, because UV light also plays a role here. And then it turns out that the blue cap of the male lights up a lot brighter than the cap of the female. And the brighter the UV light reflected from the cap, the stronger the male.

Humans, like other mammals, have two eyelids, one upper and one lower. This also applies to birds. And when they go to sleep they close these eyelids, just like us. By the way, a lot of birds do not close both eyes while sleeping, but keep an eye on the surroundings for predators. However, birds still have a third eyelid, the so-called nictitating membrane or membrana nictitans. This is generally transparent and moves over the eye from one side. This membrane has a bit the same function why we blink. It keeps the cornea (the front layer of the eye) clean and moist through tear fluid.

But that is not the only function of the nictitating membrane. For many birds this is of vital importance, because the membrane also offers protection. Take for example the peregrine falcon (Falco pregerinus), the fastest bird in the world: in a dive it can reach speeds of over 300 km/h. Because of this high speed, it sees a chance to throw itself at its flying prey, such as a wood pigeon (Columba palumbus), with great force,. The impact kills the prey almost immediately. However, this high diving speed also has consequences for the eyes of the falcon. After all, an eye is a sphere filled with moisture and the great force of the dive and the impact if the bird hits its prey will cause the eye to become distorted. As a result, the bird may be less able to see, the eyes may even be damaged. That is why the nictitating membrane closes over the eyes, so that no damage occurs.

With woodpeckers, the membrane has a similar function. These birds hammer on trees with their large beaks and you can imagine that it is not so nice for its delicate eyes. This is because chopping is accompanied by quite a bit of force and every hit causes the bird’s head to stop abruptly before it withdraws again for the next tick. Compare it if you hit with a hammer. You wave the hammer, which gives it speed, and the moment you hit a nail, for example, the hammer comes to a complete stop. As a result, the nail is driven into the wood by the force.

Also with the woodpecker that force is released at once with the impact. This force can be so big that the birds eyes can be distorted or even come out of the eye socket. And there too, the nictitating membrane comes in handy again. Because just before the woodpecker’s beak touches the tree, the membrane covers the eyes and protects it. And the eyes stay securely in their socket, as a kind of safety belt. But the membrane also ensures that debris can’t do any damage. Via Twitter, I found a video made by Doğanın Görkemi, where you can clearly see how the membrane closes just before the “impact”. The footage is at the bottom of this blog. 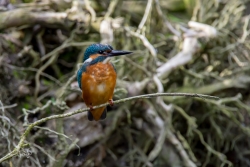 Another group of birds for which the nictitating membrane acts as a kind of shock absorber are species like the kingfisher (Alcedo atthis)and the gannet (Morus bassanus). The first catches fish by diving into the water from a branch, the second does the same, but then from a fast dive. With these birds, the nictitating membrane has the same function as with the peregrine falcon and the woodpecker. It acts as a shock absorber the moment the bird hits the water.

But for this birds and others that submerge for their food there is another good reason that they have a nictitating membrane. For example the great crested grebe (Podiceps cristatus) and the goosander (Mergus merganser), but also many duck species. Also the dipper (Cinclus cinclus), which, while walking over the bottom of a stream between the pebbles, searches for larvae from among other things mayflies and caddisflies. With these birds, the membrane functions as a kind of diving mask. It is well transparent so that the bird can see the food or prey. And it also ensures that the eyes stays clean under water. With seabirds it also protects the eyes against the influence of salt water.

Incidentally, other animal species also have a nictitating membrane, including mammals and reptiles. Often animals that hunt under water, such as sharks, crocodiles and polar bears. Dogs and cats also have this membrane, although it is rarely visible in them. If it is constantly visible, it usually indicates a disease. And even we humans have a nictitating membrane, albeit a small remnant of it. It can be seen as the protrusion in the inner eye corners. Due to the evolution, the membrane (just like for example the appendix and the tailbone) is no longer functional for humans and these are reduced to rudimentary parts. And in many thousands of years, if the human being as such still exists, these parts will probably have disappeared completely.

There is so much more to tell about bird eyes. There will probably be a part 3 (and perhaps more) again.