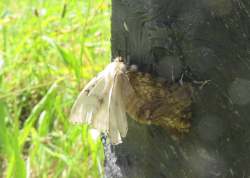 At the moment there are almost 740 photos of over 270 Dutch moth species on my website. Which, incidentally, is less than 15% of the total number of moth species in the Netherlands, so I still have a long way to go 🙂 But I have been able to add a few new species. This blog is about one of those new ones. At the beginning of August, follower Thomas Kamphuis sent me the photo on the left of two mating moths, one white and the other one dark. A curious situation, Thomas wondered. Because can mating also take place between two different species? The answer was easy. These weren’t two different species, but a couple gypsy moths (Lymantria dispar), a common species in the Netherlands. The white one is the female, which is also a bit larger than the dark male. 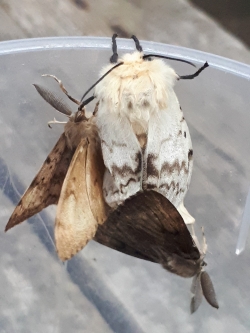 Coincidentally, the next day I got a question from another follower, John Leeninga, accompanied with a number of photos. His wife had found a small brown object in the garden, which looked like excrement. On closer inspection however it turned out to be a moth pupa. They put it in a – breathable – container to see what kind of butterfly or moth would emerge. Just a short while after the moth had crawled out of the pupa and was released by John, it was surrounded by two dark moths. Here too it turned out to be a female gypsy moth that had just emerged. The two dark ones were males which immediately picked up her pheromones with their strong feathered antennae. On the photo of the male at the bottom of this blog, these feathered antennae are clearly visible.

There is something special going on with these female moths. In an earlier blog I wrote about the winter moth (Operophtera brumata). The wingless females of that species sit on the trunks of trees waiting for the males to mate with. Those females don’t get much further than one or two trees away from the place they emerged. Moving farther afield is hardly possible without wings. The females of the gypsy moth, on the other hand, have fully developed wings but barely use them. The reason for this is unknown. Maybe they cannot or barely move their wing muscles? Or does it perhaps costs them too much energy since both the males and the females of this species don’t eat  after they have emerged from their pupa and have to live with all the energy they have absorbed in the caterpillar stage? Whatever the cause, the female barely leaves the place where she hatched and does nothing but spread her pheromones. The males immediately pick up those pheromones, as John’s photo shows. Incidentally, the moths fly both in the evening and during the day, so it is both a nocturnal and diurnal moth. 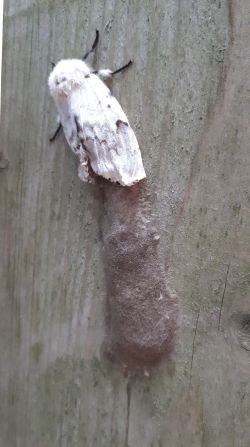 After mating, the female immediately starts to lay her eggs. She often does this in cracks in the bark of the tree, clustered together. She sticks a thick layer of hair-like scales over the eggs that she pulls from her abdomen. There the gypsy moth owes its Dutch name “plakker” which literally translated means sticker. (I tried to find out the origin of the name gypsy moth, but couldn’t find anything about it. Perhaps it is because the males travel from area to area and thus expand their habitat?) The package of eggs looks a bit like a fungus on the bark of the tree. See the photo on the right that John Leeninga also sent me. After laying the eggs and covering them in a protective layer of her own scales, a task that can take up to a couple of days, the female’s job is done and she dies. The caterpillars remain inside the eggs safely all winter. Curious caterpillars that secretly leave the egg before winter don’t survive the winter cold. In the early spring the caterpillars hatch and start feeding. Sometimes they are so abundant that they become a nuisance, especially on oak trees. I have not found any information that this has recently led to major problems in the Netherlands. But a 1949 research report by J.J. Fransen, an officer of the Ministry of Agriculture and Fisheries, speaks of a serious plague of gypsy moths in the forests of Noord-Brabant, a province in the south of the Netherlands. Fransen also offers suggestions for tackling these pests, not shunning substances such as the highly toxic DDT and HCH (better known as lindane). But also more “friendly” substances of natural origin, such as pyrethrum and derris powder, were investigated to tackle this pest.

In the US and Canada on the other hand they have different thoughts on the gypsy moth. There the moth was introduced in the mid-19th century by the French painter and scientist Étienne Léopold Trouvelot. He thought this butterfly could be a good substitute for the finicky silkworm, so that silk could be produced in a cheaper way. Whether that was the case, the story does not tell, but a few moths escaped in 1868 and managed to reproduce in the North American climate. Trouvelot warned the authorities to take measurements, but he wasn’t heard. Things were going well for the moth and the population grew considerably. In the state of Massachusetts it soon became one of the top pests and was fought with might and main (and presumably the necessary amounts of toxins). But in vain. The gypsy moth had finally established itself and today it has spread across much of the northwestern US and Canada. But the central and western part of the US cannot escape it entirely either, Leaving defoliated oaks, but also beeches, poplars and maples behind.

US federal law even states that when you move from an area where the moth has struck (a quarantained area) to an area where there is no moths plague, you are obliged to check all your garden furniture, tools, machines, et cetera for eggs, caterpillars, pupae and moths. But why is the gypsy moth such a huge problem in North America and is it not so bad in Europe? The answer is quite logical. The moth is not part of the native ecosystem over there. As a result, it has no natural enemies, such as ichneumon wasps that parasitize the caterpillars. But factors such as climate also play a role in the multiplication of species. Warmer weather will probably ensure that – prematurely – hatched caterpillars survive in the winter, which will only increase the population.

Invasive species are therefore timeless and occur all over the world. In Europe, for example, we also acquired the Asian ladybeetle (Harmonia axyridis), grey squirrel (Sciurus carolinensis), muskrat (Ondatra zibethicus), black cherry (Prunus serotina), Himalayan balsam (Impatiens glandulifera) and the Japanese knotweed (Reynoutria japonica). All alien species that have been deliberately introduced here by humans. (This is in contrast to, for example, the box tree moth (Cydalima perspectalis) that came here on boxwoods (Buxaceae) imported from China. The boxwood moth itself was not deliberately introduced here.) These exotic animals and plants also lack natural enemies here in Europe, so that they have been able to reproduce unhindered, with all the consequences.

In July 2021, the Entomological Society of America (ESA) banned the name Gypsy Moth, because it is offensive to the Romani. Also the name Gypsy Ant, for the Aphaenogaster araneoides is no longer used for the same reason. “The purpose of common names is to make communication easier between scientists and the public audiences they serve. By and large, ESA’s list of recognized insect common names succeeds in this regard, but names that are unwelcoming to marginalized communities run directly counter to that goal,” says ESA President Michelle S. Smith, BCE. “That’s why we’re working to ensure all ESA-approved insect common names meet our standards for diversity, equity, and inclusion.” In January 2022, they proposed the name spongy moth, in reference to the spongy mass of the egg casing. This new common name was formally adopted in March 2022. The name gypsy moth is, incidentally, still used in other English-speaking countries, including the United Kingdom.

This item was originally published in Dutch on Augus 16th 2020.