A forerunner of winter

So, it’s winter. Birds leave the colder, northern parts of the continent and migrate southwards in the hope that there will still be enough food for them there. Further south the soils may not be frozen yet and the birds will still be able to forage for worms and insects. Or because there are still enough berries on the bushes and trees, food for migrating birds such as the Bohemian waxwing (Bombycilla garrulus). Or because there is not as much snow yet so birds such as great grey shrike (Lanius excubitor) can still find prey. Others may come to the Netherlands to find food in our inland waters, as long as these have not frozen over. But when Old Man Winter strikes there too and the water freezes, they move further southwards.

For me one of the forerunners of the approaching winter is the goosander (Mergus merganser). Usually it is around mid-December when I see the first ones on the canal nearby during my running tours or while walking the dog. They usually sojourn in small groups of about two to six birds, sometimes more. The males with their off-white belly, dark back and the beautiful shiny green head are gorgeous in the autumn sun. The ladies have a more subdued colour palette of a gray body with a sort of milk chocolate coloured head and their prominent feathers at the back of their head, neatly combed back as if they just come from the hairdresser.

The goosander is a real freshwater bird, you won’t find them at the coast normally. This in contrast to its family member the red breasted merganser (Mergus serrator) which is typically a saltwater bird that normally doesn’t come to the inland waters. Both species feed on small fish and other water creatures, which they can hold well with their serrated beaks. Just like grebes, they can swim very well under water, where they catch their prey too. Incidentally, you can see the goosander throughout the year in the Netherlands, often on larger lakes and ponds. There are no records of successful breeding in the Netherlands. 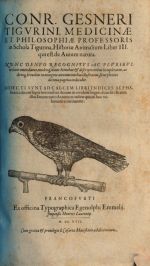 In Dutch the goosander is called ‘grote zaagbek’, translated ‘great sawbeak’. It’s not difficult to guess how the bird got this name. Goosanders also lives in North America and there it’s called the common merganser. The scientific genus name Mergus is derived from the Latin ‘mergere’ which means to immerse. The Romans already used this term for diving birds. In his 1555 work Avium natura, the Swiss naturalist Conradus Gesner also the name mergus to describe a wide range of diving birds, such as the cormorants, grebes and also the mergansers. But on the other hand he mentioned the mergansers as a separate group of “birds that have teeth”. Gesner describes the goosander as a diving bird with the size of an ‘anser’ (goose), because the goosander is clearly larger than a duck. He then decides to use the genus name merganser, so a diving goose. The size comparison with a goose also comes back in the German name ‘gänsesäger’, translated ‘goose saw’, and the English goosander, which also contains the word goose.

This post was originally published in Dutch on November 19th 2017.