This time a short blog about a beautiful phenomenon that I encountered in February 2018. Strolling through the forest, my eyes fell on something odd. A sort of snow-white down on a dead branch on the ground. It looked like a kind of long thin hair and it immediately melted the moment I touched it. I recognized it from photos, but I had never had the chance to see it in real life. This phenomenon is called hair ice, some call it the beard of Old Man Winter. It was already described in 1833, but for a long time scientists had no idea how it could arise. In 2005, Gerhart Wagner described in the Schweizer Zeitschrift für Pilzkunde (Swiss magazine of Mycology) that he found hair ice on pieces of wood that also contained mushrooms (yellow brain or witches’ butter (Tremella mesenterica) and black jelly roll or black witches’ butter (Exidia glandulosa)). After further investigation, it is explained by the presence of a fungus (mycelium) in the wood. In the year 2015, German and Swiss scientists identified that the fungus Exidiopsis effusa plays an important role in the forming of hair ice.

This fungus produces a small amount of heat through the digestion of the wood and the oxidation process, making the wood slightly warmer than the environment. The fungus only does this if it is not too cold, up to about 2 to 4 degrees Celsius below zero. (When it gets colder, the fungus goes into rest and no longer produces heat.) During these processes, water and carbon dioxide are released and these are pressed out of the wood through microscopically thin channels, the so-called medullary or marrow ray channels. Another necessary condition is high humidity. The water pressed out the marrow rays will therefore not evaporate and freezes immediately due to the low ambient temperature. Because the water is pressed out of this thin channels, “hairs” are created that grow from below. Because marrow rays are characteristic of hardwood and are lacking in softwood, it is likely that you will never find hair ice on softwood. In the Netherlands you can find it on dead wood of broad-leaved, deciduous trees like oak (Quercus spec.) or beech (Fagus spec.).

A special phenomenon, which literally disappears like snow in the sun as soon as the first rays of sunlight penetrate the forest. I was happy to see this phenomenon for once. 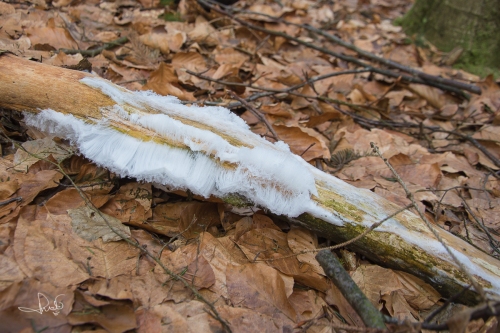 This item was originally published in Dutch on February 18th 2018