In my previous blog I wrote about the woodcock (Scolopax rusticola) and why this bird sometimes literally crash into buildings. Some readers wondered about the cause. So I decided to write a blog about birds and their eyes. In fact in two parts, because there is quite a lot to write about it. Because eyes are the most important sense of the birds.

The eyes of birds are generally relatively larger than those of humans. If you look at a bird’s skull, you see that a considerable space is occupied by the eye sockets. If human eyes were proportionately the same size, we would have eyes of at least ten centimeters in diameter! Those big eyes are very important for birds. Birds of prey for instance are able to observe their prey from a great distance. And prey animals are able to keep a close eye on the environment to see predators and birds of prey coming. Incidentally, the eyes of nocturnal hunters, such as the owls, are even larger than those of daytime hunters. After all, they must be able to see well in the dark and that requires bigger eyes. 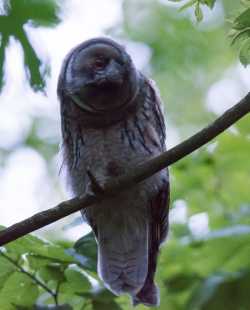 These relatively large eyes also ensure that there is little room left for muscles to move the eyes. In addition, muscles are relatively heavy and every weight saving is important. Every gram has to be taken into the air. The eyes of birds are generally rigid, so fixed, in the head. To be able to look around, the bird will have to use other ways. For example, an owl can turn its head almost completely, like this young long-eared owl (Asio otus) in the photo. And maybe you have seen a blackbird (Turdus merula) that turns its head to one side, just as if it is listening. But it doesn’t do this to listen, but to view the soil well. Because of the placement of its eyes, the bird sees almost nothing at the front, but sees well on both sides. There are also birds that can move the eyes, such as the bittern (Botaurus stellaris) and cuckoo (Cuculus canorus). 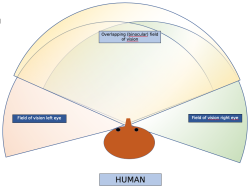 You can only estimate distance by looking in “stereo”, so with both eyes. If you close one eye, you will hardly be able to estimate a distance to an object. Just give it a try. And estimating distances only works in the area where the fields of vision of both eyes overlap, the so-called binocular field of vision. For humans, the eyes are at the front, so we have a very large overlap of the viewing fields, about 140 degrees. I tried to clarify it with the drawing on the left. You can see the field of vision of the left eye (orange area) and the right eye (green area), with the binocular field of vision in yellow in the middle.

Because of this large overlapping field of vision humans can estimate distances very well, although the one is a bit better than the other. Birds of prey and predators generally have a large binocular field of vision. They need this to be able to estimate the distance to catch prey, in addition to their big eyes to be able to notice the prey.

So back to the woodcock. As I wrote in the earlier blog, the eyes of this bird are on the side of its head. This allows the bird to see almost everything around it without moving its head. It can’t move its eyes either. Each eye covers a field of vision of almost 180 degrees. The bird sees, as it were, a hemisphere through each eye, actually as if looking through a so-called fisheye lens. This allows them to keep an eye on most of its surroundings to see if a predator is coming. 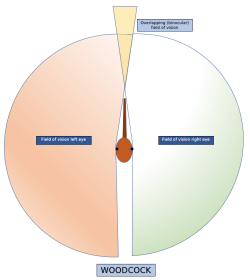 Birds like the woodcock only have a very small area where the fields of vision overlap. On the drawing you can see it on the small triangle at the front of the bird. In real life this overlap is perhaps even narrower and at some bird species there is even no overlap. These ones only see two different images (one on the left and one on the right). Because the “stereo area” of the eyes of a woodcock is so small, the bird is therefore unable to estimate distance. And that is why it only realizes at a very late stage that it almost flies into an object. If it’s a tree, it can still dodge it by quickly turning left or right and flying around it. But if it is a building, the bird can move to both sides, but that makes little sense because a building is much wider than a tree. And it still flies into it, sometimes with fatal consequences.

In my next blog I will continue to talk about bird eyes, including something about the retina and how birds handle the refractive index of water.