Spring is in the air. Although last weekend it was still snowing, you can sense that spring is coming. Perhaps a few night frosts, a bit of snow and then slowly nature awakens from its hibernation. Last week I already heard and saw some signals of the approaching spring. Since days are getting longer, birds are becoming exited. Here and there the males do their utmost to find a mate. And this weekend I heard the squeaking sound of an old-fashioned bicycle pump that is not sufficiently lubricated: the unmistakable sound of the great tit (Parus major). This bird is not a very good singer, don’t expect an extensive song like the blackbird (Turdus merula) or the song thrush (Turdus philomelos), but it has a broad oeuvre of sounds, with the bicycle pump as the most characteristic.

The great tit is a common bird in the Netherlands. At the annual national garden bird count in January (organized in the Netherlands since 2001), it has always finished on the second place. At the count in our own garden, the great tit is usually number one or the first runner up with eight to ten birds. You can find great tits everywhere where there are trees or bushes. Even in small bushes in the fields. The birds find a great deal of their food in the undergrowth and the trees. The typical tweezers’ beak indicates that great tits are insect eaters and their food consists mainly of spiders, flies and caterpillars. But they also eat seeds and that is why they can also be found on feeding tables in the garden.

You don’t have to be a seasoned birdwatcher to recognize the great tit. That black head betrays him already, although you might be mistaken in some places in the Netherlands with the coal tit (Periparus ater). It does look quite similar to the great tit but it is smaller and also much paler in colour. Coal tits are not so common and are particularly prevalent on sandy soils and in the vicinity of coniferous forests. (In Dutch the great tit is called “koolmees”, translated “coal tit”, to make the confusion even bigger.) Both the male and female of the great tit have a nice black tie. With the males it’s at its best, wide and deep black in colour and also runs through between its legs.

Home decoration by the female 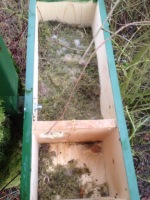 Great tits are real hollow-nesting birds, usually breeding in tree cavities. Sometimes old woodpeckers’ nests are used by them. But of course we know them mostly as a resident of nest boxes. In the absence of suitable natural breeding spots, this is often their only alternative. If they have found a nesting space, they indicate this by placing markers around the opening with the beak. The female decorates the cavity for the breeding period. With moss, hair, feathers, wool and other soft material she makes a cozy and warm home. In the nesting boxes in our garden I regularly find hairs of our dog Joes :-). In some larger nesting boxes, the female sometimes starts to decorate it so enthusiastically that sometimes a stack of more than ten centimeters of nesting material is put in. Once I have found the result of an overzealous female great tit at the inspection of a nesting box for a little owl (Athene noctua). The box was filled with nesting material from front to back over a length of around 50 cm and a width of 20 cm. See the photo on the left.

About a dozen eggs

When the nest is finished, the actual work starts for the female. Because then the eggs have to be laid. She produces one egg every day, until she has about ten, sometimes even fifteen eggs. She only starts breeding when she has laid at least eight to ten eggs. Such large clutches are pretty common for small birds like tits. After all, they are low in the food chain and therefore on the menu of many predators. Who doesn’t know the phenomenon that suddenly all the birds in your garden fly up and a sparrowhawk (Accipiter nisus) or goshawk (Accipiter gentilis) flashes through the garden, hoping to grab a small snack? Litters of small birds are also predated by other birds. The emptying of nest boxes by great spotted woodpecker (Dendrocopus major) is well known but jays (Garrulus glandarius) and magpies (Pica pica) also raid nest boxes. And my friend Maico, who checks the English translations of my blogs, has seen during a survey of great tits that the pine marten (Martes martes) also predates nests of great tits.

Furthermore, mortality among young birds due to food shortage can be very high. The youngsters are mainly fed with caterpillars during the nesting phase. This is an important source of protein for the young birds. Research has shown that a young great tit eats about 10,000 caterpillars before fledging, all of which must be brought in by mom and dad. The trick is to lay the eggs at such a time that when the eggs hatches, the amount of caterpillars is sufficient for the youngsters. So it coincides with the so-called caterpillar peak. This is caused by the fact that some types of moths (like the Mottled Umber (Erannis defoliaria)) lay their eggs in winter and their caterpillars come out in early spring. The availability of these caterpillars is important for the great tits (but also for blue tits (Cyanistes caeruleus)). A prolonged freezing winter causes a late caterpillar peak, so the tits have to adjust their nesting period. In recent years, the winters have been very mild, causing the caterpillar peak to take place earlier andthus the great tits have to start laying eggs earlier.

If they start laying eggs too late, the caterpillar peak is over and the parents are not able to feed all the youngsters. Therefore their first clutch will often partly fail. By the time the parent birds have their second (and sometimes third) clutches, the caterpillar peak is over and they feed their chicks mostly with other insects instead. These are also high in protein, but far less than a caterpillar, so many tens of thousands of insects have to be caught to feed the youngsters. Dad and mom great tit have a busy task. Certainly if one of them is caught by a bird of prey or a cat (!), The remaining parent will be unable to feed the young birds. It is estimated that most of the youngsters do not survive the first year. Now great tits can have two, even three hatches per season and it is obvious why. Only then enough youngsters remain for the survival of the species.

On average, in recent decades the start of the breeding season for great tits has been brought forward by half a day per year. Was it in 1986 on the 110th day of the year (around 11 April), in 2006 it was already on the 100th day of the year (around 1 April). And in recent years, breeding great tits in the second half of March are no exception. The great tit seems to be a very adaptive bird. But one severe frost period in early March (which was no exception in the last years) and the amount of caterpillars decreases enormously. However, the great tit has more survival techniques. For example, they sometimes store seeds in tree cavities or nest boxes, which they eat during periods of lower food supply, like a kind of food storage. But also thanks to the seeds, fat cakes and suet blocks in our gardens. These are of great importance for the survival of the tits.

Although you may not think so, great tits are migratory birds too. Almost every bird is, by the way. But the populations of birds that migrate south are supplemented by members of the same species from the north and the east. So the numbers of birds you see in winter hardly fluctuate. In the winter of 2012 it was discovered that there were great tits in the Netherlands (but also in Germany, Belgium, France) that clearly had a different call than “ours”. The most striking was a shrill, high and fast “wie-wie-wie”. The German birdwatcher Matthias Feuersenger also noticed this, but the sound was familiar to him. He discovered that this sound was identical to that of calling great tits in Cheboksary in Russia, about 700 km east of Moscow. Those great tits apparently had a different dialect. And that was confirmed by ringing data of captured great tits. So at that time there was an invasion of Russian great tits in Western Europe.

Well, as long as it stays with great tits …

This post was originally published in Dutch on February 11th 2018