Although it’s hard to believe with the current weather conditions (-3 °C with a strong easterly wind, 7 on the scale of Beaufort, on March 17th), spring is coming. It has been for a while though, because even before the frosty period that plagued us a week and a half ago, the first signals were already visible. And for me that was, in addition to the cheerful whistling of the birds that were searching for a partner, the very first butterfly of this year. 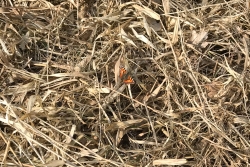 Normally, this honor goes to the brimstone (Gonepteryx rhamni). A species of which the males start looking for females in early March. During winter the butterflies hide in a cool and dark place, such as in hollow trees, sheds, but also the special butterfly boxes. But this time it was not a brimstone. In fact, I haven’t seen one this year, though it’s a very striking butterfly that you don’t easily overlook.

No, this time was the scoop for a small tortoiseshell (Aglais urticae). Ten days ago, on the 7th of March, I saw the first while I was walking our dog Joes. I had to get used to the image of such a cheerful flying insect, almost dancing in the air. For a moment it sat on the grass and I was able to take a picture of it with my iPhone. Then he continued dancing happily. It was the only one there.

As with the other wintering butterflies, the males emerge first as soon as the early spring heat presents itself. And then they start looking. First for a new territory, often in a sheltered location and in the vicinity of nettles. The common nettle (Urtica dioica) in particular, although they are not really visible at the moment.

If they have found a nice spot, they defend this against intruders. And while they defend this territory they also hope to find a female. Because even if you has such a beautiful area conquered, without female it’s no use. When after a few hours of defending and waiting no female has announced herself, they will look for another territory, where they will attempt the same thing again. They fly towards everything that looks somewhat like a female.

Every dark coloured passing object is chased. If it is another male, it is expelled from the territory, if it is a female, the male will follow her around until she sits down. This chase can take hours and there are more male candidates that are interested in the female butterfly. The females don’t care about the territorial borders. After a long chase the female chooses a male. How she makes her decision is not known, but eventually she sits down, usually on a leaf of the common nettle. After all, that is the preferred host plant of the small tortoiseshell. The male sits behind her and touches her wings with his antennae. If they both agree, the mating begins. Not just for a few seconds as with birds. No, this party lasts all night. Yes, all night! And that without pills, powders or drinks.

After mating, the female lays her eggs on the nettles, preferably those growing in open sunny places. The next day, when the temperature is high enough, she lays a few dozen to hundreds of eggs on the underside of a nettle leaf. The funny thing is that the female flies away in a straight line when she is disrupted during the egg laying, and she comes back to the same spot later on to complete the deposition of the eggs. After 6 to 10 days the caterpillars come out of the eggs, after which they make a nest out of a few nettle leaves held together with strands of silk.

In these nests the young caterpillars live together in groups, varying from a few to hundreds of caterpillars. They regale themselves with the leaves of the host plant and when it is completely bald, they go to the next plant. Preferably a young big nettle. Later the group falls apart and the caterpillars live more solitary. The caterpillars are very sensitive to frost and especially night frost later in the season (April-May) can take its toll. After 13 to 22 days they pupate on plant stems and about 8 to 12 days later a beautiful small tortoiseshell emerges and then the cycle starts again from the beginning.

So you can see three peak periods with small tortoiseshells in a year. In the spring the hibernants who fly in search of a partner. Then the first generation flying around June and finally the second generation in the summer with a peak in August. The second generation will make sure that they get enough nectar to endure the winter. They get the nectar from plants such as butterfly bush (Buddleja davidii), hemp-agrimony (Eupatorium cannabinum) and dandelion (Taraxacum officinale). The first two grow in our garden and are loaded with small tortoiseshells every summer, among other butterflies.

In taxonomy, that is science that deals with the classification of species among other things, the small tortoiseshell is seen as a close relative of the peacock (Aglais io). Both are beautiful butterflies, which also explains the genus name Aglais: it is derived from the Greek “aglaos”, which means splendor. But as far as  beauty is concerned, more butterflies may bear this name. The species specific name urticae refers to the genus name of the favorite host plant of this butterfly, the Urtica or nettles. I do not know where the comparison with a turtle shield in the English name of the species comes from. In Dutch its name is kleine vos, which means little fox. The butterfly owes that name to the brown-red colour on the wings, which resembles that of the fox (Vulpes vulpes). The German name “kleiner fuchs” and French name “petit-renard” also refers to the foxy colour. In French however, the butterfly has a second name, “la petite tortue”, literally the little turtoise. That has similarities with the English name small tortoiseshell. The ‘small’ adjective suggests that there is also a large tortoiseshell and indeed, there is: Nymphalis polychloros. This is a very rare and threatened butterfly in the Netherlands that is close to extinction. As you can tell by looking at the scientific name, this species is placed in a different genus than the small tortoiseshell. However, they belong to the same family, the Nymphalidae, which also includes the emperors and fritillaries.

Not an easy business, taxonomy.

A bit of luck