Sometimes your garden is flooded with cheerful and busy tweeting from a little flock of birds. This time not that of sparrows. It’s much more subtle. A kind of soft chatter, interspersed with beeps, long and short. Take a good look in the bushes or shrubs and you will probably see them there. Small brown / white feather balls with long tails. Two piercing black beady eyes and a tiny black beak. Some people call them flying lollypops. Indeed, they look like a flying lollypop with the tail as a stick. Of course I am talking about the long-tailed tit (Aegithalos caudatus). In contrary to what the name suggests, it is not a member of the tit famlily (Paridae), but they form an own family Aegithalidae within the order of songbirds Passeriformes. In the past they were grouped into the same family as the great and blue tit. DNA research, among other things, has shown that they differ considerably from this family.

The long-tailed tit is a relatively small bird. Its long tail, up to six to ten centimeters, gives it a total length of 13 to 16 centimeters. This means that long-tailed tits have tails longer than their bodies! They often fluff up their feathers which makes them look a lot bigger, but don’t be fooled, it is mostly fluff these fluffballs consist of.

Long-tailed tits are known to be very social birds. You will therefore rarely find them alone. Outside of the breeding season they often form flocks that can easily contain 20-25 and sometimes up to 50-60 individuals. These flocks can often be seen roaming woods and gardens.” If one bird in the flock has fallen behind, the other birds will wait until it catches up with the flock and they happily continue their path. The social character of the bird is also expressed during the breeding season. The breeding pairs don’t have their own territory, but they share a large territory with several other breeding pairs. This territory is jointly defended against intruders.

Breeding pairs are often assisted by other adult birds that don’t have their own brood or whose brood has failed. These helpers act as a sort of foster parents. Long-tailed tits are monogamous birds and therefore very loyal to their partner. There is also a clear hierarchy within the group. The birds that are higher in the pecking order are more likely to survive in the winter. To stay warm during winter, they sleep closely together and the birds from the highest ranks sleep in the middle, the warmest and cosiest spot.

Besides their DNA, there is another important difference between long-tailed tits and birds from the tit family, namely the way their nests are constructed. After all, most tits are cave breeders, but the long-tailed tit makes a beautiful spherical nest of, among other things, lichens, feathers and cobwebs. A true work of art that is hidden between the foliage of, for example, conifers. These nest balls have an opening at the top, along which the parent birds squeeze into the nest. That is not easy with that long tail. They have to lay the tail flat on their backs during breeding. And so they breed the eight to twelve eggs in almost two weeks. After the young birds have hatched, they are kept in the nest for another 18-19 days. You can imagine that it’s a full house with all those long tails in that little nest ball. From the moment they fledge, the young birds are fed for another two weeks, sometimes by the foster parents from the group.

You can see long-tailed tits in the Netherlands year-round. They will breed in a variety of habitats as long as there is a sufficient amount of trees or shrubs in which they can build their nest and in which they can look for food. Their diet consists for a large part of small insects such as caterpillars and in winter they will add seeds to their menu. They are real resident birds, because they always stay close to the place where they have fledged. In general they travel no more than a few kilometers in search of food. The bird is found throughout Europe and parts of Asia up to Japan. Except the Arctic north, because there are no trees over there.

Bird with the long tail

The scientific genus name Aegithalos was already used by Aristotle in ancient times as a general name for tits. Where this name comes from is not known. It seems that Aristotle took it from a non-Greek language, but which one? The species name caudatus comes from Latin and means “provided with a tail”. And that this little bird surely is! The Swiss naturalist Conrad Gessner also used the epithet caudatus to describe other other bird species with a strikingly long tail. For example for the magpie (Pica pica), which he called Pica caudatus at that time. And he called the long-tailed tit Parus caudatus. Where the genus name Parus refers to the non-existent affinity with the tit family. Linneaus took over this species name. 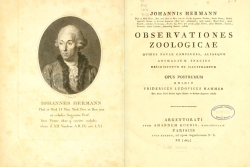 The French physicist Johann Hermann used the genus name Aegithalos for the first time in his “Observationes zoologicae: quibus novae complures” in 1804. He apparently found that the long-tailed tit had an insufficient amount of characteristics in common with other tits for it to be placed in the same family. Their beak in particular did not match that of a Parus. So Hermann reintroduced the genus name Aegithalos. His suspicion was confirmed many decades later, after DNA studies proved him right.