An impressive bird of prey, the buzzard (Buteo buteo). It’s the most common raptor species in the Netherlands. It’s often seen on poles and traffic signs along roads. They have a bit of arrogance and seem to follow you with their penetrating gaze, as if you could be their prey at any time. But don’t be afraid, the buzzard has a taste for smaller animals. And it’s not such a fast bird either, it’s a lazy hunter. If possible, It would rather scavenge on a roadkill bunny than go hunting for fresh meat. You won’t see it flashing through the garden to grab an unsuspecting Great Tit, which was still eating a bit of a fat block a second before. That is more something you can expect from a sparrow hawk or hawk. The buzzard is a real opportunist which actually takes potluck.

From a vantage point it searches its surroundings for a potential meal. When the buzzard has spotted something, it flies towards it with a few powerful wing strokes, alternating with a glide flight. Sometimes you can see it hovering, similar to a kestrel A hovering buzzard may not look as elegant as a hovering kestrel but it hovers with the same purpose: to search the ground for traces of, for example, voles or moles. Besides small mammals, buzzards also feed on frogs and if a buzzard doesn’t have to put too much effort into it, it may also catch a small bird. If necessary buzzards can switch diet very quickly. They may not turn down a big fat rainworm.

The tide has turned

Just like the other birds of prey, buzzards experienced a population decline for many years. Rabbits, an important food source for the buzzard, declined because of viral diseases. Prey animals contained high amounts of agricultural poisons and lead from bullets would poison the dead bait buzzards would feed on. Active hunting and people deliberately laying out poisoned bait were also major causes of the buzzard’s decline. Fortunately, the tide has now turned and some raptor species, including the buzzard, are experiencing better times. The number of breeding pairs has increased from 2000 to 10 000 pairs in the last 25 years. Unfortunately in some parts of the Netherlands birds of prey are still actively hunted. Late 2016 even saw a white-tailed eagle being shot from the sky.

In winter one can usually see more buzzards than during summer. The Netherlands are then visited by birds from Scandinavia that spend the winter here, while our own buzzards just stay here. In addition, Rough-legged buzzards (Buteo lagopus) also spend the winter in the Netherlands. Sometimes a few dozen, sometimes a few hundred. They look very similar, even though the rough-legged buzzards are a bit bigger. There are some other external features that you can use to tell the two species apart but you’ll need a trained eye to see them During autumn and spring migration you have the greatest chance of seeing many buzzards together. For example, on the 12th of October 2015 I counted no less than 55 buzzards on a field of approximately 20 hectares. Such an impressive number that I almost lost count!

Buzzards are no shy birds either. I regularly cross their path when I am running. Usually they do not mind me running past them and only when I get very close, they take off with a few wing beats. The fact that they aren’t easily scared is also proved by the stories about “horror buzzards”. Every animal species that tries to defend his or her offspring and does not shy away from chasing away the perceived threat, in this case a human being, gets the prefix “horror “. So there are horror eagle owls, horror crows and now there are “horror buzzards” too. Not to mention the horror clowns, and they are really scary. 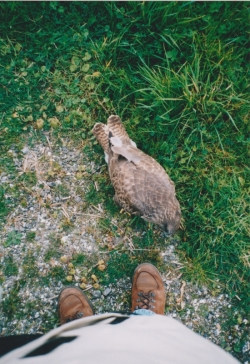 Twice I had a very close encounter with a buzzard. The first time was at a family holiday near the Zeeland coast in the southwest of the Netherlands. A buzzard quietly sitting on a pole as our entire family passed. I wanted to take a closer look at it. So I carefully stepped closer and closer until I was about a meter away from the bird! Focusing with my camera did not even work anymore, I was that close. The bird sat quietly. At one point he jumped on the ground and happily waddled between my legs. This was quite a “wow” moment. Later I understood that this bird had fallen from the nest as a youngster. It was the last young that had hatched. The forester had taken care of this young bird and brought it up but in complete freedom. So although this bird was not at all shy of people it was still able to feed itself without any human support. 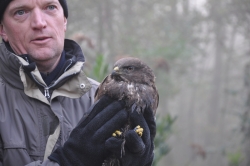 The second time was a few years ago. I caught a buzzard that was clearly weakened but that did not show any signs of external injuries. It was so weakened that I could easily grab it! It was later picked up by the animal ambulance. A day later I called and unfortunately it didn’t survive. It had no poisoning characteristics, but in retrospect I might have had to pick up its cadaver for a closer examination at a specialized laboratory. Because unfortunately, as I wrote before, buzzards are often the victims of persecution.

You can see buzzards in many colour variations. From very dark, almost black to very light ones. Some think that a buzzard becomes lighter in colour as it ages. Or that the lighter birds are Scandinavian winter guests. But neither is the case. A buzzard simply has a very varied plumage, that is actually genetically determined. Elena Kappers of the University of Groningen and the Max Planck Institute for Ornithology is researching this for her doctoral study. Through this website or via waarneming.nl you can enter an observation of a buzzard and its colour pattern. The number of collected observations from the Netherlands is somewhat disappointing however.

Whatever colour the bird has, the buzzard is still a beautiful animal. Especially when the youngsters have flown out and and the entire young family can  be seen soaring on a thermal. Their call sounds a bit like a meowing cat. So if you hear this sound, take a look up in the air. You may see five, six or even more buzzards flying around there. A beautiful view.

This post was originally published in Dutch on January 22nd 2017

A forerunner of winter