Spring is in the air, nature is ready for it. Great tits (Parus major) are doing their utmost and are singing like squeaky bicycle pumps and the snowdrops show their tiny white flowers. Maybe I cheer too early, because there may still be a period of frost. Like at the beginning of March 2018, when after a few weeks of mild weather we were treated to severe cold. Even cold enough to freeze over lakes and freezes ice rinks, so the skating enthusiasts could skate. Nature was also a bit surprised by the frosty weather. In all Dutch media the photo taken by the 13-year-old Christophe van Ingen from Oostzaan of a kingfisher (Alcedo atthis) frozen in the icewas shown. As I wrote in one of my first blogs, a kingfisher doesn’t like frost at all. In fact, in case of severe frost, about three out of four kingfishers don’t survive.

Another bird that doesn’t like severe cold is the woodcock (Scolopax rusticola). A bird about the size of a collared dove, which lives in the woods. This in contrast to its family members common snipe (Gallinago gallinago) and jack snipe (Lymnocryptes minimus), which live at shallow water lakes and ditches. You can often see common snipes foraging in groups, but the woodcock on the other hand is a real soloist. With its brown-black mottled plumage it’s really a master in hiding itself on the ground between the foliage and twigs. As long as the bird feels safe it won’t move and stays in place. Only when you take a step too close it suddenly flies up to disappear zigzagging between the trees. Leaving you behind, probably in shock because you didn’t expected this.

During the breeding season, woodcocks can be found in large pine and deciduous forests of at minimal a few dozen hectares. Preferably with a nice thick humus layer, because there the bird finds its food. With its long beak it pricks in the upper soft soil layer for earthworms, earwigs, woodlice, caterpillars, spiders and other creepy crawlies. The tip of its beak is extra sensitive, so it feels when it has struck on a little insect. The bird then grabs with the movable end of its beak, as with a pair of tweezers, the prey. Many birds with long beaks have such a sensitive and flexible end of the beak. In winter, the creepy crawlies move further into the soil to overwinter. As long as the soil is still soft, the woodcock can still find them. But once the ground is frozen, it’s over. The birds migrate from the woods to villages and cities in search for food. Sometimes you can see them even in gardens and parks. See the photo below that I made in a garden in March 2018. I can remember from my youth that during one of my newspaper rounds in the morning I was startled by a flying woodcock next to a garden path.

Woodcocks are actually real migratory birds, but only leave when it’s getting too cold and they even can’t find food in the cities. Birds from Northeast Europe come to the Netherlands to overwinter and ‘our’ woodcocks move southwards. They are not very high flyers, they fly at most a few dozen meters above the ground and that introduces another problem. During migration, many woodcocks fly against buildings every year. Some birds survive the impact, remaining a bit dazed on the ground and flying off after having recovered. That can take some hours, sometimes even more than a day. But unfortunately many birds don’t survive the collision. Why are they flying against buildings, while they seemingly effortlessly maneuver among the trees in the forest? This is due to the placement of their eyes, which are on the side of their heads. And in such a way that they have 360 ​​degrees around view. Very handy to see enemies coming, but every advantage has its disadvantage. And that is, in the case of woodcock, the fact that they can barely estimate depth due to the position of their eyes. This is not a problem in the forest, because at the moment they see a tree they quickly can change course and pass the tree on the left or right side. With a building that becomes more difficult and mostly they can’t avoid a collision. If you incidentally find a dazed victim of a facade, put the animal outside in a box in a sheltered, safe place so that a cat or dog can’t reach it. As soon as the bird has recovered, it will fly away.

But this is not the only danger for woodcocks. It’s also a popular game bird. Not because the bird causes damage, but just for fun and to eat. In the Netherlands it has been a protected bird since 2002 and hunting woodcock is fortunately forbidden. That not everyone cares about that, is evident from the fact that in 2015 a woodcock was shot. By a gamekeeper nonetheless. In the last century there was even an illustrious hunting party in the Netherlands with the name Bols Snippen Club (Bols Woodcock Club). You could become a member if you had shot two woodcocks (a so-called doublet or brace) in a few seconds with a double-barreled shotgun and this was confirmed by two witnesses. Fortunately, this club was finally disbanded in 1983 due to lack of new members.

Everything for the sport

So in the Netherlands it is forbidden to shoot woodcock, but in the surrounding countries the woodcock is unfortunately still legally hunted. Except in Flanders, where it’s also a protected species. But in the other half of Belgium, Wallonia, one can still shoot these beautiful birds for fun. In Germany hunting ‘Waldschnepfe’ is also still allowed and in France many ‘bécasses des bois’ are being shot every year. In fact, the French don’t care much about what they are shooting, and they even want to legalize hunting black-tailed godwit (Limosa limosa) and curlew (Numenius arquata) again. While in the Netherlands we do our utmost to protect these species from extinction. For our overseas English neighbors the shooting of woodcock is also a sporting event. Thanks to over-hunting in England, the species has become rare in some places and has completely disappeared in some areas. Unfortunately they still have even a counterpart of the Bols Woodcock Club, namely the Shooting Times Woodcock Club. But everything for the sport of course. You understand that I am not so fond of hunters.

It’s obvious where the bird gets its English name woodcock. The name snipe for its family is akin to the Old High German ‘snepfa’, the Old Norse ‘snīpa’ and the Anglo-Saxon ‘sneppa’. It is probably derived from the long straight beak of the bird. The genus name Scolopax was already used by Aristotle for a bird species suspected to be the woodcock. Rusticola possibly originates from the Latin rus: (flat) land and colere: resident. Although the woodcock is not particular a resident of the countryside but of the woods. Eventually Gesner introduces the name rusticola in 1555 and Linnaeus took it over in 1758, so the woodcock has since been known as Scolopax rusticola. 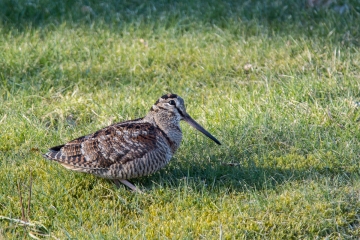