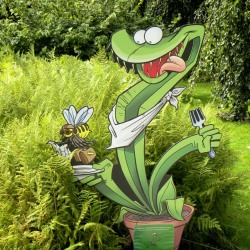 Carnivorous plants are often depicted in the same way: a stem with some leaves and a large head with razor-sharp teeth at the end. Staring at the meat that is served in a bloodthirsty way. A stereotypical image like the one on the left that we will all recognize. They are sold in garden centers as houseplants, such as the Venus flytrap (Dionaea muscipula); a subtropical plant native to the swamps and wet pine forests of North Carolina (USA). Other varieties sold here as houseplants are the trumpet pitchers (Sarracenia), which also have their origin in North America.

In the Netherlands too?

What you may not know is that carnivorous plants also occur in the Netherlands. Not solely as planted or escaped exotic plants, but as native species that grow in the wild. First of all, common butterwort (Pinguicula vulgaris): a hardy species that can be found all over Europe, including up to an elevation of 1000 meters in mountains. It is a rare plant in the Netherlands that is mainly still found in the nature reserve Veluwe and in the eastern parts of the provinces Gelderland and Overijssel, especially the regions Achterhoek and Twente. This species has declined sharply since the 1950s, particularly due to the disappearance of the acidic wet and – above all – poor soils where it feels at home. Think of specific grasslands (Cirsium dissecti-Molinietum) and swampy heaths, two landscape types that are under great pressure from eutrophication and desiccation.

The second species that occurs in the Netherlands is the sundew. Or actually three species, namely the oblong-leaved sundew (Drosera intermedia), the round-leaved sundew (D. rotundifolia) and the English or great sundew (D. anglica). The first two are on the Dutch Red List as very common but sharply declining. The latter is very rare and therefore legally protected. Sundew are plants that thrives best on wet, nutrient-poor, acidic soils. In bogs moors and lowland fens you have a good chance of encountering them. These are landscape types that are also gradually disappearing due to eutrophication and acidification, so thanks to humans.

You don’t have to worry that a carnivorous plant will sink its teeth into your calves or feast on a piece of your buttock. The plants mainly target insects. Flies, mosquitoes, spiders, but also damselflies and sometimes even dragonflies have to suffer. Carnivorous plants use different methods to catch their prey. The previously mentioned Venus flytrap has two leaf halves that snap shut at the slightest touch by an insect and the prey cannot escape from this instant prison. Trumpet pitchers have cup-shaped flowers with very smooth walls. Insects can hardly get a hold on the wall and thus slide into the ominous depth of the flower. Sundew has tentacles that secrete a sticky substance. The unfortunate insect is attracted by the sweet-smelling odor of this juice, but then gets stuck.

The next step is to consume this delicious prey. The plants do not have real teeth, so there is no possibility of chewing. But they do have something else in common with our way of eating, which is the use of digestive juices. The enzymes in our saliva ensure that our food is pre-digested and the – acidic – juices in our stomach and enzymes in our intstines finish the job. This also applies to the carnivorous plants. The adhesive of the sundew, the liquid in the trumpet pitcher and the moisture that the Venus fly trap secretes when the leaf is closed, include enzymes that make the insect turn into a juicy paste, which then is absorbed by the plant.

Carnivorous plants are mainly found in areas with nutrient-poor pools (small shallow lakes on sandy soils) and in nitrogen-poor swamps. Precisely because of the lack of nutrients in the soil, especially nitrogen, these species focus on the consumption of insects. This is how they supplement this nitrogen deficiency and are still able to thrive. As with so many plants, an excess of nutrients ensures that these plants cannot survive and therefore disappear. (Apart from the sundew: that is why it is also important – in addition to minimizing mowing – to remove the clippings from for example grasslands and roadsides. The soil remains sparse and provides a good variety of planting. Plants like nettle flourish on nutrient-rich soil, but many other plants and herbs are losing out. The problem of nitrification of the soil (which has been denied by some, despite all the scientifically substantiated arguments and, moreover, visible effects for years) is one of the main causes of plants like sundew disappearing.

Sundew is a plant that you can easily overlook. But if you have ever seen one and you are looking in the right environment, chances are that you will find the plant again. And with luck, you’ll find an insect that has fallen victim to this murderous plant, like the fly in the last photo. Be careful though, because the plant is so small that you can just stand on it. And the oblong-leaved and round-leaved sundew may not be legally protected, but they deserve to be cherished. After all, so much is already disappearing from our nature.