Now that the spring sun dares to show itself more and more often, the first butterflies or the year are also being seen. These will be hibernating butterflies that emerge from their hiding places. There are four species of common butterflies in the Netherlands that overwinter as imagos (adult butterflies). Besides the peacock butterfly (Aglais io), the small tortoiseshell (Aglais urticae) and the brimstone (Gonepteryx rhamni), there is the comma butterfly (Polygonia c-album). A butterfly with a characteristic shape of the wings. It plays the main role in this blog.

The rear edge of the wings is coarsely serrated, as if pieces have been removed. Whether the butterfly is sitting with the wings open or closed, those jagged wing edges will immediately catch your eye. In Dutch this butterfly is called gehakkelde aurelia, and the word gehakkeld refers to its serrated wings. The French call this butterfly Robert-le-Diable, or Robert the devil. The origin of this name is somewhat unclear, except that it refers to a certain Robert. According to legend, this Robert was born in the twelfth century as the son of duke Aubert and duchess Indre, residents of the Château Moulineaux near Rouen. The story goes that the duchess was unable to bear children. When she finally gave birth to a son after the umpteenth lovemaking with the duke, it had to be the devil’s work. And so their son Robert’s nickname was a fact. And the bond with the butterfly? One source refers to the shape of the wing edges, which is reminiscent of the hooked nose that Robert would have had. The other refers to a devil’s cape, which the wing shape is reminiscent of. Yet another sees in the colour of the butterfly and the shape of the wing the flames of hell.

The origin of the English name comma, the German name C-falter and the scientific species name c-album is a lot simpler. They all refer to the small white curl on the underside of the rear wing. This curl looks like a comma or a C, and album (also alba or albus) is Latin for white. An old Dutch name for the butterfly was also (white) C-butterfly. That white C really stands out, because the underside of both the front and rear wing is brown in colour. The scientific genus name Polygonia literally means multiform, referring to the shape of the wings.

As with the map (Araschnia levana), there is also a difference between the spring and autumn generation of the comma butterfly. The spring generation has a lighter underside of the wings than that of the butterfly that flies in the autumn. This spring or summer form is also called forma hutchinsoni, after the British Emma Hutchinson (1820-1906), who was the first to distinguish the two forms of this butterfly at the time. The difference is also visible on the upper side of the wings, the spring form is a bit lighter in colour.

Like other butterfly species, the main host plant of the comma is the common or stinging nettle (Urtica dioica). I always give as a tip to people who want butterflies in the garden to take care of these common nettles in their garden or at least in the immediate vicinity. Not everyone cheers on the presence of that rampant nettle but it is really an important plant for our butterflies and moths. More than fifty species of them depend on this plant. This includes butterfly species such as the admiral (Vanessa atalanta), the painted lady (Vanessa cardui), the peacock and the map. And moths such as the small magpie (Anania hortulata), the dark spectacle (Abrostola triplasia) and the common nettle-tap (Anthophila fabriciana). To prevent the nettles from spreading throughout your garden, you can plant them in a large mortar tub (and possibly bury this in your garden). The plant multiplies with its large rhizomes and the mortar tub keeps its spreading within limits.

The common nettle is not the only host plant of the comma. The caterpillars can also be found on hops (Humulus lupulus) and to a lesser extent wych elm (Ulmus gladra), ribes (Ribes spp.), willow (Salix spp.) and common hazel (Corylus avellana). That the animal kingdom, despite the changes that are mainly caused by us humans, knows how to adapt very well is also proven by the comma. Until the beginning of the twentieth century, this butterfly was a common species in the Netherlands. Then it quickly went downhill and in 1925 it was even considered a rare species. In the following decades there was a revival, followed by another decline in the 1960s, after which the butterfly could only be found in the south of the Netherlands. Since the 1980s, the butterfly has been on the rise throughout the country and today the comma is a common species throughout the Netherlands.

From hops to nettel 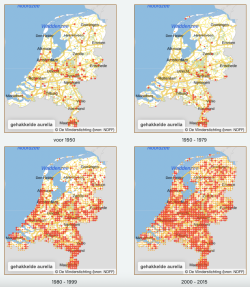 The cause can be sought in the hop plant. The flowers of this plant are used as a preservative and flavouring agent in the preparation of beer. In the past, this plant was often cultivated for this purpose in the Netherlands and the comma was therefore frequently present. Not entirely to the delight of the hop growers, by the way, because the caterpillars of the butterfly can cause great damage to the crop. Incidentally, the ghost moth (Hepialus humuli) was also to blame. Hop cultivation declined sharply in the Netherlands in the second half of the last century. Now it is still cultivated in only a few places. So with the disappearance of the hop, an important host plant of the comma disappeared. The butterfly went in search of another host plant and found it in the common nettle, which occurs all over the country. The picture of the Dutch Butterfly Foundation on the left shows how the butterfly until 1950 only occurred here and there in the Netherlands and can now be found everywhere.

Overwintering peacocks and small tortoiseshells can often be found in cellars, attics and, for example, garden sheds. The brimstone and the comma don’t do this, they hibernate in the open air. The brimstone seeks out the dense vegetation such as ivy (Hedera spp.) or blackberry (Rubus spp.). (By the way: if you’re after a houseplant that is easy to care for, ivy is a fantastic option!) The comma is looking for a hibernation spot near the ground, for example at the bottom of tree roots, but also in a hollow tree, between piles of wood or fallen leaves. Early in the year they feed on, among other things, the nectar of blackthorn (Prunus spinosa) and flowering willows. And later in the year they can be found on blackberry, hemp-agrimony (Eupatorium cannabinum) and creeping thistle (Cirsium arvense). In the fall you can do them a big favor by putting some rotting fruit outside. Not only commas love it, it is also a true food feast for other butterflies.