It is one of the smallest birds in the Netherlands and yet this bird manages to drown out everything with its loud song: the wren (Nannus troglodytes). Nothing more than a small ball of brown feathers with a little raised tail. Barely nine centimeters long and weighing almost as many grams. It is not the smallest bird that flies around here in the Netherlands. That honour goes to the goldcrest (Regulus regulus) of approximately 8.5 cm and approximately 7 grams, with the firecrest (Regulus ignicapilla) which is slightly larger, in second place. As with such a low weight, the little wren is not exactly a bird that can throw its weight into battle to mark its territory or to impress females, it has to be done vocally. Which it does with great gusto. Research has shown that the wren is capable of producing a whopping 640 notes per minute! Not only that, the song is very loud too! I haven’t measured it myself, but this little ball of feathers seems to be producing about 90 decibels. Similar to a screaming child, just to name one example. The sound also carries very far, you seem to be able to hear it at a distance of 500 meters. Then, of course, there should not be too much noise in the area so that it is drowned out. And your hearing should still be fine.

This bird does not make that noise for nothing. It has a large territory to mark and defend. That territory can cover a few hundred square meters. At least big enough to accommodate several nests. The male is a true construction worker, because it builds six to sometimes ten nests in its territory. Although in shell construction, inside it still has to be furnished to taste. But still, that little bugger manages to do it. If a female likes the male wren, she subjects the nests one by one to a thorough inspection. When she finds a nest of her choice, they mate and the female lays five to eight tiny eggs in the nest. But not before she has covered the inside with moss, feathers, hair and more soft material. In the meantime, the male goes on the seduction tour again. After all, he still has a few nests to offer. And when he has found a new female, he also picks up on her. This process may repeat itself once or twice. Incidentally, not all male wrens are polygamous, there are also those that stick to one female. That might be tiring enough 🙂

In the meantime, the females take care of the eggs in the various nests. After 14 to 19 days of incubation, the eggs hatch and feeding time begins. Although the male usually has several females, it does fulfil its paternal duties. It also flies in and out with food for the offspring and after eight days the young birds are almost as big as their parents. You understand that it is a bit  crowded in that little nest. A week to two weeks later, the young fledge and are usually fed by the parents for a few more days. In the meantime, the male is also nursing the young from the next nest. This polygamous lifestyle demands a lot from him. And the female generally has two litters a year. So both are busy trying to ensure the survival of the species. 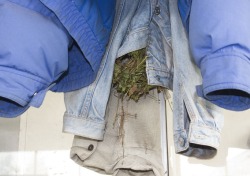 Such a nest is actually quite artfully made. It is spherical in shape with an opening on the side. It is made of withered leaves, moss, grass and small twigs. The male builds the nests in nicely messy piles of branches, dense undergrowth and ivy hedges. But you probably also know those photos of wrens in an old coat hanging in a garden shed. Such as the photo on the right that the Dutch photographer and blogger Adri de Groot took. Wrens don’t just like thick shrubberies to make their nests in. They also find their food there. With their fine tweezer beaks they are real insectivores and they scurry around a lot between the branches and leaves in search of spiders, insects, caterpillars and other larvae. Although the bird may have a big beak when it comes to singing, when it comes to food only small things fit in it.

The scientific species name troglodytes has its origins in the Greek troglodutes, which contains Greek trogle: hollow, and dutes: diver. So literally it means cave diver. Some relate this to the bulbous nest with the small entrance, which is reminiscent of a burrow. But it could also come from the bird’s fondness for dense undergrowth. After all, the wren makes its nests there and sneaks around, looking for something tasty. The origin of the scientific name is reinforced by one of the oldest Germanic names, namely zaunschlüpfer, which means hedge-climber. So it may well be that Linnaeus had that in mind when he came up with this name. He named the bird Motacilla troglodytes. Until a few years ago the scientific name was Troglodytes troglodytes. Worldwide there is no formal agreement or consensus on taxonomy and naming and therefore this name is not applied everywhere. In most countries the name Troglodytes troglodytes is still used. I follow the naming convention by the Dutch Committee for Avian Systematics (Commissie Systematic Nederlandse Avifauna CSNA) and therefore I use Nannus troglodytes.

Not a winter lover

In Dutch the wren is called winterkoning, which literally means winter king. Although its Dutch name suggests otherwise, the wren is not a true lover of the winter cold. An icy winter night can cost a wren as much as 10% of its fat reserves to keep its body at the right temperature. So with a longer period of frost, many wrens will succumb. As a result of which the population can decrease to more than half. After all, supplementing the weight is not so easy in the winter. There are hardly any insects, spiders or caterpillars to be found. These invertebrates have generally retreated to sheltered corners or in the leaf litter, waiting for spring. Because the wren has several nests per year with relatively large clutches, the population can recover considerably in a few years.

Only if there are several consecutive years with severe winters it can really become a problem for the wren. In order to get through the winter well, the birds have a very social way. Although they are very territorial, they step away from that behaviour for a while in winter and all sit in a sheltered spot close to each other. In this way they keep each other nice and warm and the least energy is lost. It can be in a hollow tree, but also a nesting box for tits. Sometimes more than ten wrens are packed together in such a box. In rare  cases there can be many more, there are known cases of more than sixty birds in one box

King of the winter

So if this little bird doesn’t really like ice-cold winters, how does it got a Dutch name that presupposes that it can withstand even the harshest cold? There are various explanations for this, including that the wren is one of the few birds that you also hear singing in winter. Another statement I don’t want to withhold from you goes back to the Greek sagas. The story goes that the birds also wanted to crown one of them king, like the lion was crowned as king of mammals. It was agreed that the bird that could fly the highest should be given this honour. The eagle thought this could be no problem and began to climb to ever greater heights on the thermals with its enormous wings. Leaving the other bird species well below. Once he arrived high in the sky, where his opponents were only specks, he imagined himself the king of birds. Just then a small bird emerged from its plumage. It was hiding there unnoticed and had hitched to this unprecedented height. The bird flew with a few beats of its little wings just a few meters higher than the eagle, whereupon the latter had to give in. From that day on, the little bird was allowed to call itself the king of the winter.